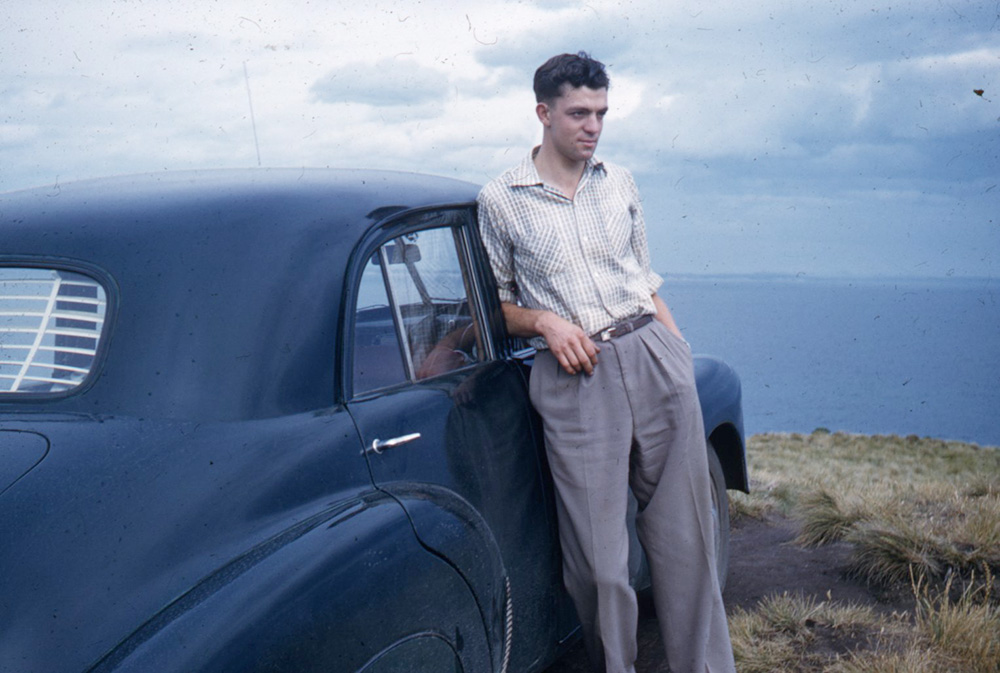 When I’m on the lookout for Kodachrome slides I gravitate to the ones that define the era they were ‘snapped’ in. People in the 1950s and 1960s dressed smarter and were often seen sporting hats. Motels and caravans tell the story of a time when families were happy to travel hours in the car without air conditioning to arrive at ordinary destinations.

And then there’s the car. From our first ‘love-at-first-sight’ car to the trusty family vehicle, we can’t help but feel nostalgic about them. These photos of cars and their humans are scanned from rescued Kodachrome slides. If you know what make/model any of these cars are contact me or comment on this post.

I’m not sure if William has car troubles or he’s stopping for a rest. It wasn’t uncommon in years gone by to stop at the side of the road and have a cup of tea from your thermos to break up a long journey. The number plate on this car is from Queensland (Australia), however, I cannot find a place called Tindale so perhaps its a property called Tindale. Slide dated 1966.

Girl Posing in Front of Holden

You can just imagine dad saying ‘Stand still while I take a photo’. Never mind this little tacker is blinded by the glorious sunshine and won’t be able to see anything for the next twenty minutes….getting a photo of the new Holden in the driveway is far more important.

What’s interesting about this photo (besides the fact it looks like Bon Scott is in the driver’s seat) is the aspect it’s taken from. Where exactly is the photographer? A second storey balcony in the middle of nowhere? Up a tree? Never mind that, this dude thinks he’s waaaay cool in his GTS Monaro with the black stripes. And. He. Is.

Has Anyone Seen My Doll?

I have no idea what’s going on here. Is this a wedding car? Is Essendon Football Club in the grand final? Or has this guy stolen his kid’s doll just to make his wheels look pretty?

As I’m peering into this photo grasping for nice things to write about what is an ordinary-looking car and a drab motel, I notice the two suitcases resting by the door. Can you imagine travelling with suitcases THAT small these days?

I didn’t rescue this slide and I SO WISH I DID. What. A. Slide! This (and a few others on this post) were rescued by a friend. The only thing that would have made this shot better was if the guy was staring moodily at the camera.

Too Cool For School

This dude looks happy and why wouldn’t he be? He’s spending the day out in the Aussie bush with his sleek black car and in his thongs no less! Another great photo which is unfortunately out of focus. Licence plate is Victoria (Australia).

Are We There Yet?

Ahhh the obligatory state border photo. “Quick kids get out the car so we can get a shot. Try not to get run over.”