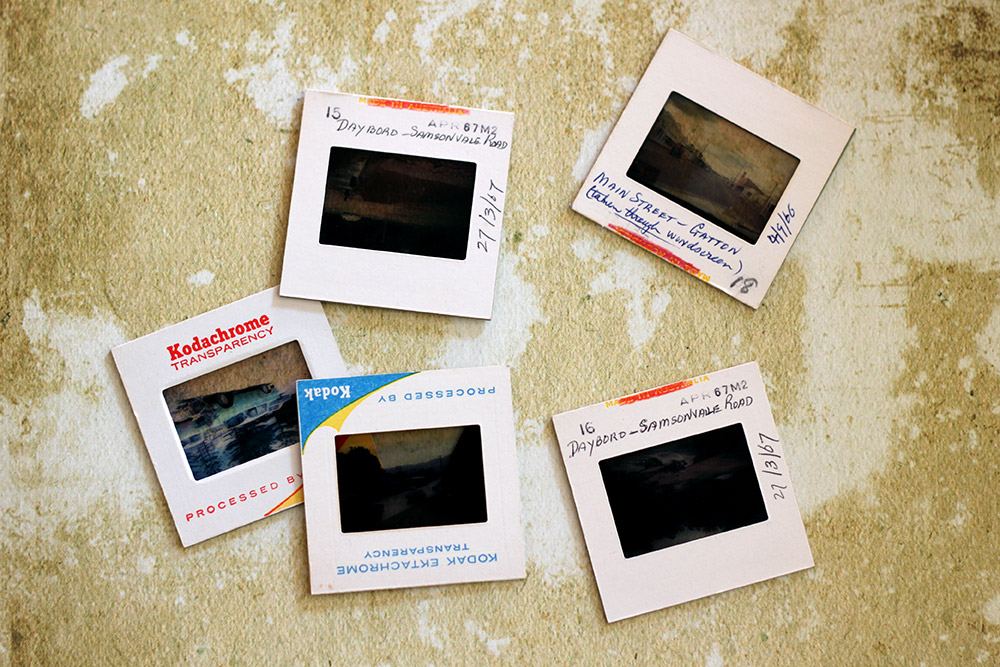 I was super excited to see this set of five Kodachrome Slides on eBay and wondered if I was about to be embroiled in a fierce bidding war. Only days prior I had been outbid on another set of Kodachrome slides and was feeling somewhat deflated that I wasn’t prepared to pay as much as the next guy. There was clearly someone out there with more passion (and more money!) than me when it came to rescuing slides!

I was super keen on this set because it contained Holden cars, a Holden sign at a petrol station and each slide had writing on it. Writing! Fortunately, I was the only bidder.

Finding slides with streetscapes and cars is always fun but the writing on this set means most of the locations aren’t a mystery. The image below is my favourite because it’s taken through the windscreen. In fact, the writing on the slide says just that “Main Street – Gatton (taken through windscreen)”. The last image on this page is a ‘then and now’ shot of the one below.

Whilst the writing on the next slide says ‘Joyce’s car” it’s unclear if that’s Joyce sitting in front on the car with her hat on her lap. Perhaps. Perhaps not. This lady looks quite elderly. The Holden appears to be an EJ Holden which was produced in Australia in 1962-1963. Judging by the trees this location might be at a beach; it would explain why they are sitting in chairs in front of the car. This slide has no year stamp or year written on it.

Below is Gatton 1966 compared to Google maps street view 2016. The slide says “Main Street, Gatton” however it appears to be now called Railway Street. The building on the right-hand side with the staggered roof line was the clue to matching the location.