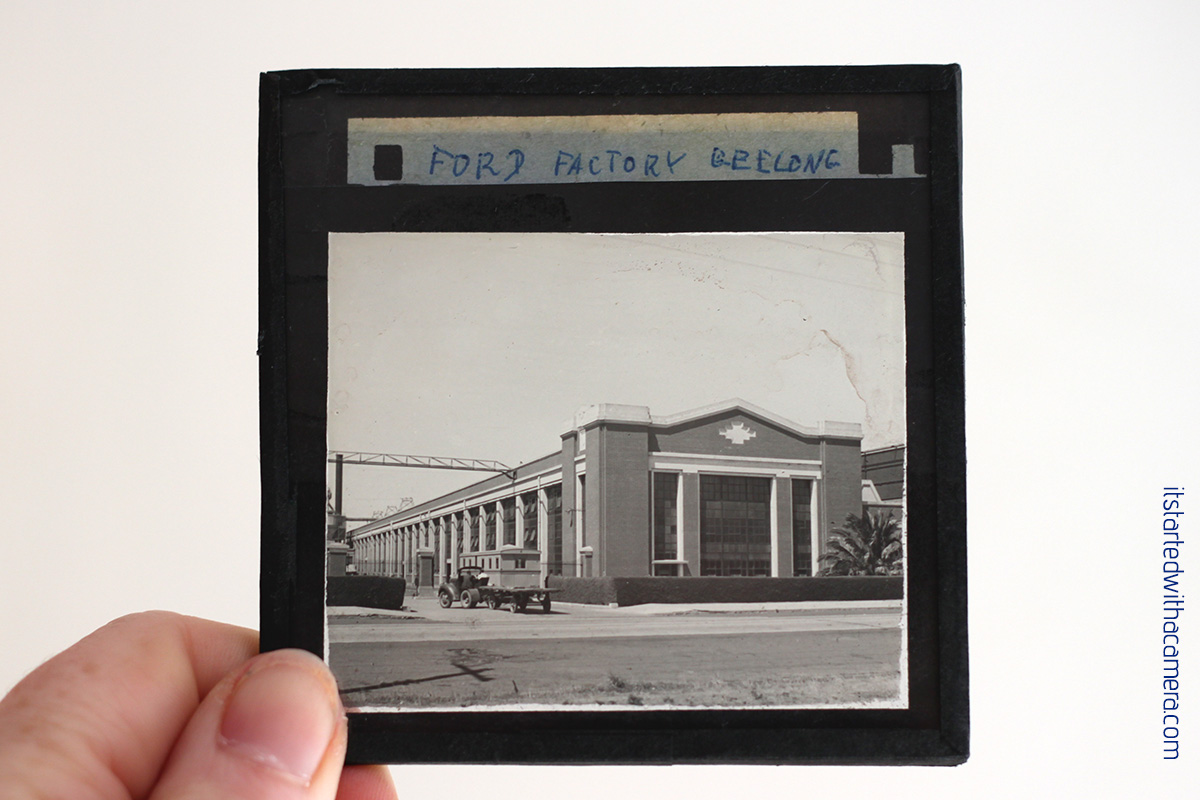 Fords were never my thing. I was a Holden girl. However, when I stumbled across this magic lantern slide of the Ford Factory in Geelong I knew it was worth the £5 or so asking price, particularly as the Ford Factory closed only a few years ago. The seller was located in Cornwall in the UK and the postage price (to Australia) was reasonable so I jumped at adding this unique piece to my ever-evolving collection of photographic memorabilia.

A magic lantern is an early type of image projector employing pictures painted, printed or produced photographically on transparent plates (usually made of glass), one or more lenses and a light source. It was developed in the 17th century for entertainment purposes and was also later used for educational purposes. The magic lantern was in wide use from the 18th century until the mid-20th century when it was superseded by a compact version that could hold the 35mm photographic slides.1

The pictures used were originally hand painted on glass slides. The first photographic slides, called Hyalotypes, were invented in Philadelphia in 18481  and consisted of two sheets of glass, one which has the image on it and the other which covers the image. The two sheets of glass are then bound all around by a black paper tape.2

It was on 31 March 1925 that Ford announced Geelong was to be the Australian headquarters. The first Australian-built Ford was a Model T that came off an improvised production line in a disused Geelong wool storage warehouse in June 1925, while work started on a factory in the nearby suburb of Norlane.3

I was curious about the history of my new Ford Factory glass lantern slide so I messaged the seller to find out more. Gary from Cornwell wrote:

“Unfortunately we got them at auction so there is no background but the person was travelling around Australia, NZ and Africa looking at industry and farming as well as irrigation and was involved with the vegetarian union (which I didn’t even think existed then!)”

The slightly amusing side to this story is the glass lantern slide is now living with a vegetarian…I’m sure the original owner will be pleased!

The image was apparently taken in 1949 and for comparison, I’ve included a photo of the factory as it was in 2018 post-closure when the site was up for sale; its future unknown. The size of the glass lantern slide is 8cm x 8cm.