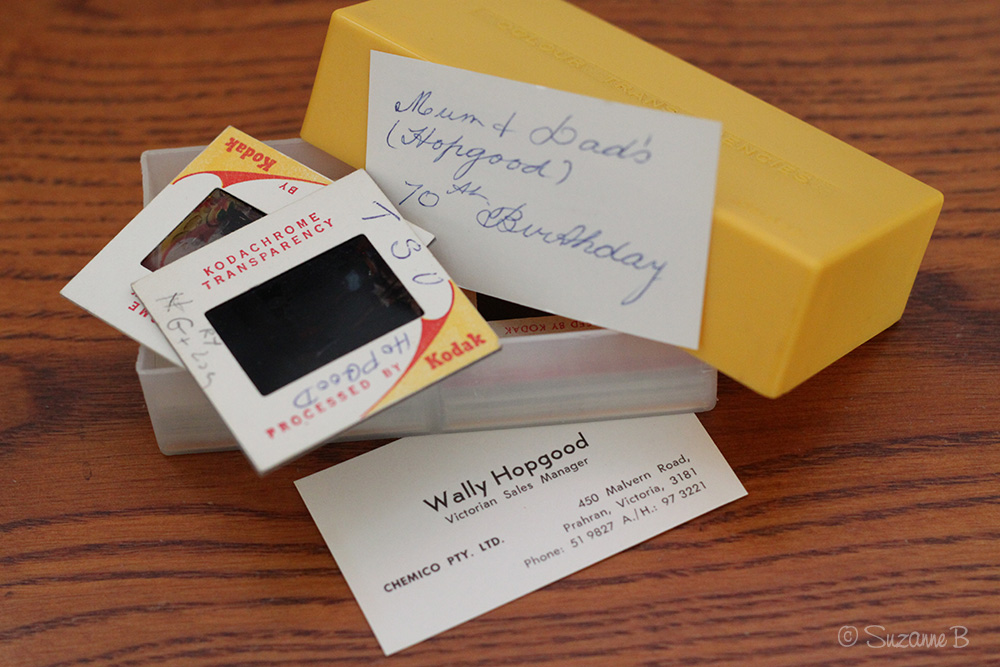 During one of my expeditions to the Waverly Antique Bazaar, I spied a cabinet that contained several boxes of Kodachrome slides. The cabinet was locked so I asked the assistant to pick me a box, any box.

She selected a box and turned it over. “Oh how exciting, this one has writing inside.”

I paid my $10 and headed home with the history of someone else’s memories now in my custody.

The pack of slides contained two identical business cards except one of them had writing on the back…”Mum & Dad’s (Hopgood) 70th Birthday”. The card belonged to a Wally Hopgood, Victorian Sales Manager for Chemico Pty. Ltd. of Prahran in Victoria, Australia, a chemist supply company that is probably long gone. (Yes, I’ve Googled it)

The pack contained 19 slides, mostly of Mum Hopgood’s birthday party but a few other strays as well including Mum and Dad Hopgood standing on the tarmac clearly about to ‘jet’ off somewhere or other. In the background, a TAA and an Ansett plane can be seen – both airlines now a distant memory in Australian aviation history. If I were to take a guess I’d surmise Wally is standing behind Mum Hopgood’s left shoulder in the image below.

When I went back to the antique store many months later I vowed to purchase more of the slides from the cabinet as they likely also belonged to the Hopgood family but unfortunately they had all been sold.

The full set of 19 Kodachrome slides will eventually be put up on my Flickr Rescued Slides album, however, I’ve included a few below.