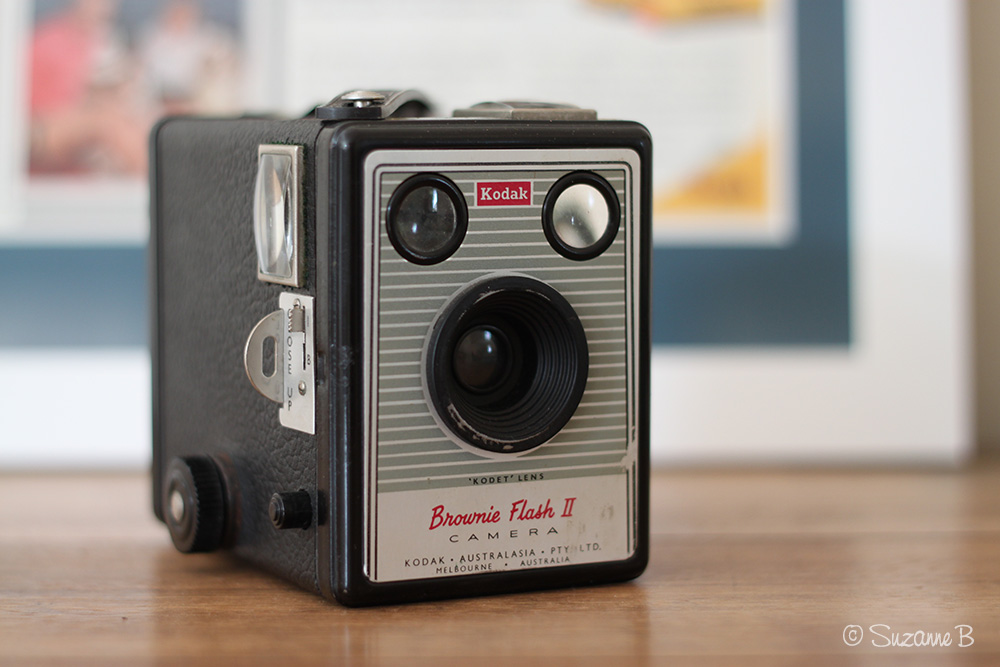 A Kodak Number 2 Folding Autographic Brownie (1916) came next but I’m at a loss to remember where exactly I bought it and how much I paid for it. $25 perhaps. From there, vintage cameras just seemed to find their way into my home, each one bringing a fascination for what people, places and moments in time the lens had been witness to. Who had owned the camera? Who had been photographed by it?  Where were they now?

During a recent trip to Euroa, on what has been dubbed by my family as a ‘photographic intervention’ (more on this another day), my Godmother proudly handed over her Kodak Brownie Flash II (1958-1963) she’d been given by her parents when she was in Grade 6. This model, incidentally, was to be the last of the Box Brownie cameras and was one of the few in my collection that I knew the history of. It certainly warranted something more than being relegated to the back of an already overcrowded shelving unit.

Interestingly, not long before I was given the Brownie I had read the blog of a Cornish woman who, in recent years, was traipsing the countryside taking shots with her Box Brownie. A search for 620 film ensued. This Brownie was special therefore this Brownie needed a ‘project’. I’d been hankering for a project for some time and this was it! If I could get film then I’d run a roll through the camera. But the dilemma was “What would I photograph?” It didn’t take long for the idea to come to me. I’d photograph family and friends standing in front of their homes just like they did in the ‘olden’ days.

Whilst I did find an online site where I could backorder rare 620 film, I also discovered that 620 and 120 film were the same (Kodak changed their spool size so only Kodak film could be used in their cameras) and 120 was readily available, you just needed to respool the film onto the 620 reel. My local camera store, Camera House sell and develop 120 film so off I toddled to see if they’d be kind enough to respool the film so my Brownie could embark on its very important job. The film cost $14.95 and they waived the $5 respooling fee, even though my film respooler proceeded to mutter how much he hated doing it because the metal film holder often caused cuts. I’m sure he was secretly pleased I’d come along with a challenging project to intercept his mundane ‘digital’ day at the camera store.

One locked-and-loaded Brownie later, I’m now pondering to use this roll as a test film. I can just imagine the protests if I do the rounds of photographing everyone in front of their homes and I stuff it up and then need to go back and make them do it all again. Given I have 8 shots per film I need to make every shot count but I think using the first film for less important shots is the way to go.