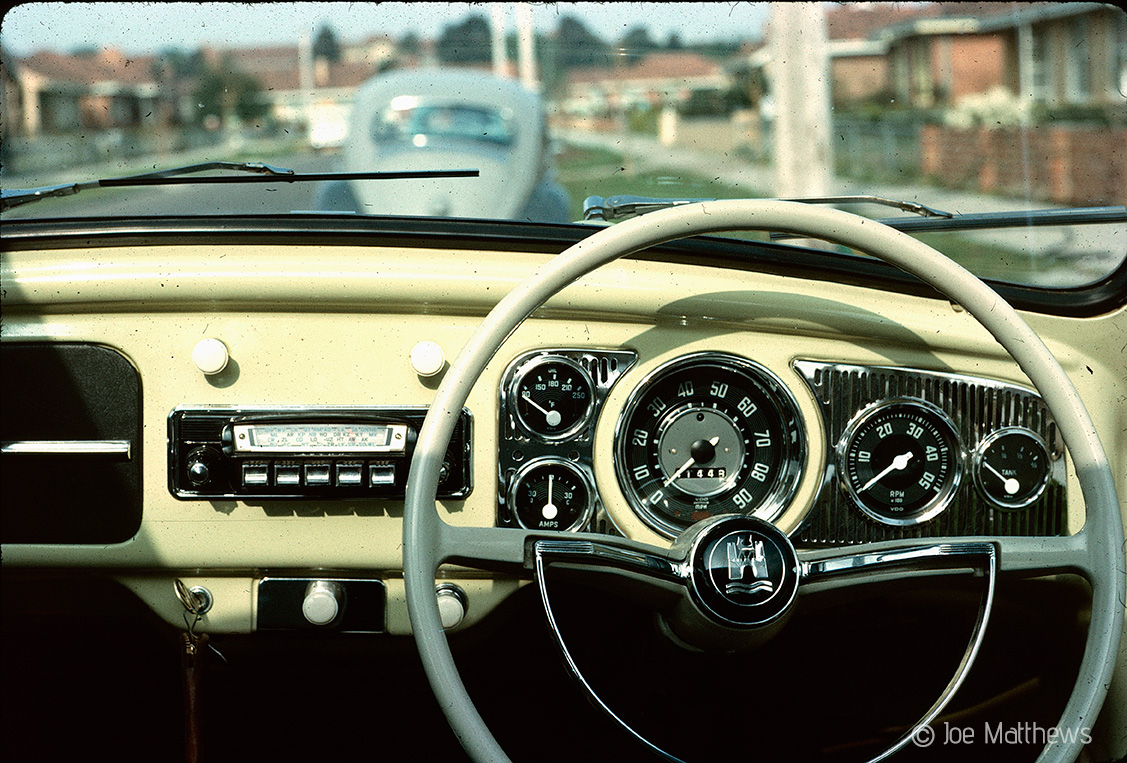 Our passion for certain things in life often begin in rather mundane ways; sometimes we can’t even recall what the trigger was that set us off on a life-long obsession.  My passion for rescuing 35mm Kodachrome slides and giving them a second life recently collided with a family friend’s passion for Volkswagen Beetles in the 1960s which lead to my discovery of the VW Auto Club Melbourne.

Joe Matthews and my father, David Burville, have been friends since they were pre-teens back in the 1950s, sharing many of the same interests throughout life, VW beetles being one. Whilst going through Joe’s extensive collection of Kodachrome slides I noticed there were a set which included VWs in large groups on the roadside and on the beach.  I wanted to know more.

Why Volkswagen Beetles I asked, curious to know how it all started. Apparently two co-workers who often gave Joe a lift from his job at Kodak owned Beetles and he thought they were ‘pretty cool’.  Thus, his first car was an ex-demo model 1961 Volkswagen Beetle (with sunroof) which he ‘enhanced’ to within an inch of its life with extras such as a state-of-the-art press-button radio, a tachometer, oil pressure and temperature gauges, an Amp meter, sway bars, sun visors, a side flash, stone guards, a parcel shelf and rear speakers.

It was during a visit to the Volkswagen showroom that Joe ran into someone who told him about the VW Auto Club Melbourne.  He decided to join and spent the next 5 or 6 years in the club until marriage and children took priority.

The club met monthly and held regular outings and events. There was a joining fee although no one can recall what it was and news of upcoming events was communicated at meetings or via the club newsletter. Typical outings included picnics, road trips, treasure hunts and Gymkhanas – a timed event that involved negotiating a slalom course whilst collecting flags and placing them in designated buckets. One of the more memorable outings was a visit to the Parkville Children’s Home (Park Street, Victoria, Australia) where the club collected numerous minors and took them to the beach for the day, something that certainly wouldn’t be allowed today. Denise (Joe’s wife) clearly recalled the two girls they had in the back of their Beetle who came from ‘at-risk homes’.

Another event that was a big hit was an overnight rally which was conducted through Victorian state forests. The event commenced around 7pm on Friday night and ended on Saturday morning. At the completion of the event contestants gathered for breakfast at a café in the town of Kilmore to re-convene and to share their rally “war stories”.

VW beetles were selling like hot-cakes in the 1960s, prompting Volkswagen to construct a factory at Clayton Victoria to assemble Beetles. During that time the club had a number of hosted factory tours which were really enjoyed.

Aside from outings, club members held their own working bees where they repaired and improved their own, and other members VWs. One of the members, Bob Matthews volunteered his home garage to be used as the club’s unofficial workshop… over time a number of special tools and facilities were funded by the club.

At the time of his membership, Joe estimates there were 30 to 40 members in the club. If you were a member of this club I’d love to hear from you or see any photos you have.

Below is a list of some of the members around the time Joe and David were in the club. If you know of more, please contact me and I’ll add them to the list.